In the times of the second viceroy of New Spain, Don Luis de Velasco (1550 - 1564), a pleasure mansion was built on one of the slopes of Chapultepec Hill. In this place the newly arrived viceroys of Spain lodged, while their triumphal entry to the capital of New Spain was organized (remember that at that time Chapultepec was on the outskirts of Mexico City). Over time, the building was abandoned and finally, it was seriously damaged by the explosion of a nearby powder magazine. For this reason, the architects in charge of the reconstruction, by order of Viceroy Matías de Gálvez, suggested the construction of a new palace on the top of the hill.

In 1785, during the government of Viceroy Bernardo de Gálvez (1785-1786), the construction of the new palace began. It was conducted under the direction of two engineers, first Francisco Bambitelli and then Manuel Agustín Mascaró. Nevertheless the project did not prosper and the Spanish Crown ordered to suspend the works and to auction the place; transaction that was not successful because nobody was interested in the building. The ministers of the Royal Treasury took advantage of the abandonment of the enclosure to auction glass, doors and windows, until the City Council of Mexico City acquired it in 1806, preventing it from being in the hands of private individuals. According to the plans and various sources, this is what the Palace of Chapultepec would look like, although its construction was never completed by the death of Viceroy Bernardo de Gálvez:

7. Living room of the palace

24. Anteroom of the secretary

It was in 1833 when the decision was taken to convert the then abandoned palace of Chapultepec into the headquarters of the Military College. In 1841, the reconstruction of the building began. Among the adaptations made to the building was the construction, on the highest part of the hill, of a tower or "Caballero Alto", which gave it the appearance of strength. That was when he was called "Castillo".

Years later, this construction was occupied for the first time as the residence of the Mexican Executive Power. Miguel Miramón, a former student of the Military College, chose the Castillo as his presidential residence during his term as interim agent of the conservative side (1859-1860). During his stay he made some adjustments to the building to make it habitable, such as the construction of new rooms on the second floor of the Alcázar and the south balustrade. 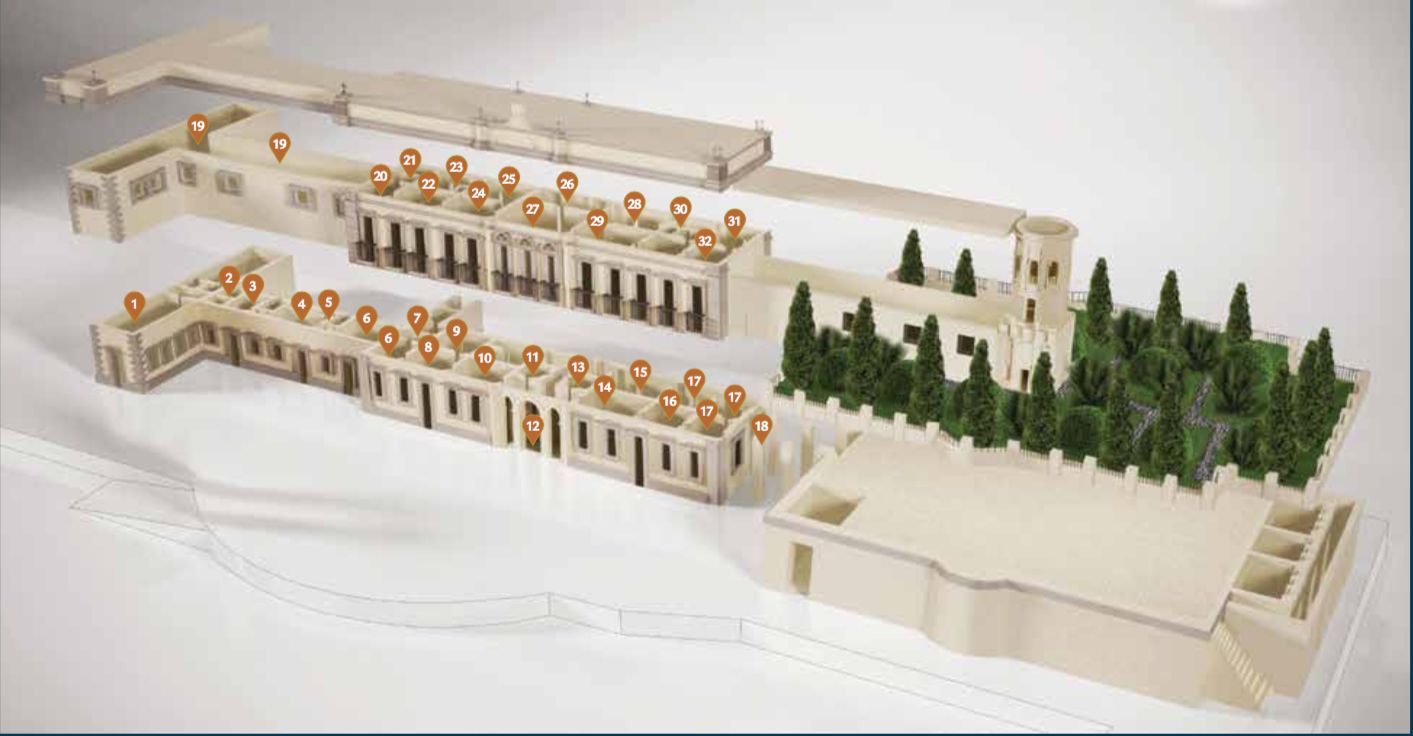 The Alcázar acquired its current appearance when the Austrian archduke Maximilian of Hapsburg and his wife, the Belgian princess Carlota Amalia, resided in the Castle between 1864 and 1867, during the Second French Intervention. The building was converted into a palace by Mexican architect Ramón Rodríguez Arangoity, former student of the Military College, and the gardens were redesigned by the Austrian botanist Wilhelm Knechtel, although, according to Carlota, "it was more due to Max's hand." While the works progressed, furniture, pianos, porcelain and silver china, oils with portraits of the imperial couple, tapestries, table clocks, tablecloths and glassware arrived to make the Alcázar a real palace.

Maximiliano and Carlota chose as rooms the rooms of the ground floor that looked towards the East, towards the City of Mexico, the lake of Texcoco and the volcanoes Iztaccíhuatl and Popocatépetl; which is why they ordered to build a panoramic terrace in front of their rooms.

1. Arcades and balconies are added to the south façade

2. A central porch is built, composed of five half-point arches

3. A tower that connects the 2 floors is built

5. The Board Room is built

In 1878 the first National Astronomical Observatory was established in the Chapultepec Castle, for which the building was once again conditioned. Specialized equipment was installed, the main telescope was arranged in the High Knight, for which a dome was added to the tower; In addition, new rooms and two guard posts were built. In 1883 the observatory was transferred to the town of Tacubaya so that the Castle could become, again, Military College, in addition to summer residence of Porfirio Diaz.

Diaz intended the building to be a showcase for Mexico's artistic and technological progress, in part because it was frequented by foreign characters. He installed, for example, a large stained glass window on the east terrace of the upper floor of the Alcázar, which has been preserved to date; elevators, including one that climbed people from the base of the hill; and a bowling alley, a fashion game among the well-to-do, in whose room the first cinema exhibition was held in Mexico in 1896.

On the other hand, President Díaz decided to convert the forest surrounding the Castle into a park for citizenship. Roads and streams were laid, sculptures were installed, a botanical garden and kiosks, and an artificial lake was created.

1. The west section of the building was built to house facilities of the Military College

2. The lodge begun in the Maximilian period was completed

3. The High Knight was endowed with a dome for astronomical observation

In 1916, President Venustiano Carranza ordered the demolition of the building southwest of the College (built during the Porfirian era) to make the Alcazar more visible; that is where he installed the offices of the federal government and the presidential residence. The consecutive presidents maintained this headquarters until the government of Abelardo Rodríguez.

In 1939, President Lázaro Cárdenas decreed that the National Museum of History be installed in the Chapultepec Castle, an area declared a national heritage site. Between 1941 and 1944 the building was restored and adapted to house the collections that had been designated to the museum. On September 27, 1944, President Miguel Ávila Camacho inaugurated the National Museum of History.